Not all investment fees are equal

Over the last decade, there’s been an increased vocalisation of investors’ concerns about the cost associated with investing. This concern has stemmed partly from the growing income disparity evident in society, which was epitomised by the Occupy Wall Street movement which started in Manhattan in September 2011. The Occupy movement sought to highlight the inequality in society, but unfortunately six years later has all but disappeared. The tragedy is that the extent of income disparity remains a socio-economic issue which requires resolution and may well have been the undercurrent which has been surfed by populist political agendas in the last year. A further driver of this investor focus on cost has been the dearth of excess return or alpha amongst active managers. As a result investors responded by moving “en masse” into passive beta products, which offered market exposure at a discount to traditional active management fees. Since this initial response, passive ETF (exchange traded fund) flows have exploded. Deutsche Bank estimates that global ETF AUM has increased to US$3.5 trillion in 2016 from just over US$500 million in 2006 (See chart below).

While these drivers of investor concerns are real challenges, the latter is one which the investment industry needs to take the lead in addressing. Many stakeholders in the industry have attempted to do so by drawing attention to the cost of investing into pooled investment vehicles, focusing specifically on Total Expense Ratios (TER) and Effective Annual Costs (EAC). We would like to suggest that the quote by Warren Buffet above, applies not only to decisions made by portfolio managers, but also to investors, as they discern between cost and value. To aid this process, we would like to introduce the concept of a Value Ratio.

The Value Ratio
It is impossible to determine whether costs are high or low without framing that cost in the context of the value provided. We understand this concept of a quality premium in a variety of situations, such as restaurant selection, holiday accommodation and even the vehicles we drive. In a number of instances, the benefit of this quality is an intangible concept but one which is clearly understood. In the investment industry, we’ve developed a range of metrics which assess the quality of investment performance relative to risk in measures such as Sharpe, Sortino, Calmar and other ratios. We have however not developed any metrics to assist investors with assessing value relative to cost. Instead what we have done is shone a huge light on costs (read fees) in isolation, in an attempt to enhance returns. Every argument I’ve seen about this compares market index returns on a pre-fees and post-fees basis. The clarity of the conclusion certainly cannot be disputed. When you pay fees on market returns you lower the actual return. Seems pretty obvious and one on which probably not too much time should be spent. The challenge arises when we extrapolate this argument that all fees are detrimental and should be reduced at all costs, excuse the pun!

Let me illustrate the challenge in this extrapolation by means of a simplified and stylised example. Let’s make the assumption that an investor pays a manager a fixed management fee of 1% of the asset base, and then further agrees to pay the manager a 20% performance

fee on alpha generated. Let’s assume for now that this example represents a South African General Equity mandate with performance fees payable above the SWIX.

The chart below reflects the total fee payable for every additional 0.1% of alpha production, with alpha displayed on the horizontal-axis from 0% to 10%. The first obvious observation is that the blue bars rise as alpha increases. A focus on TER and EAC requires investors to seek to minimise that cost by either capping fees or reducing participation rates or removing performance fees altogether. Upon closer observation, I’d like to draw your attention to the first bar (shaded red) on the far left of the horizontal-axis. This red bar represents the fee outcome in the event of zero alpha production. 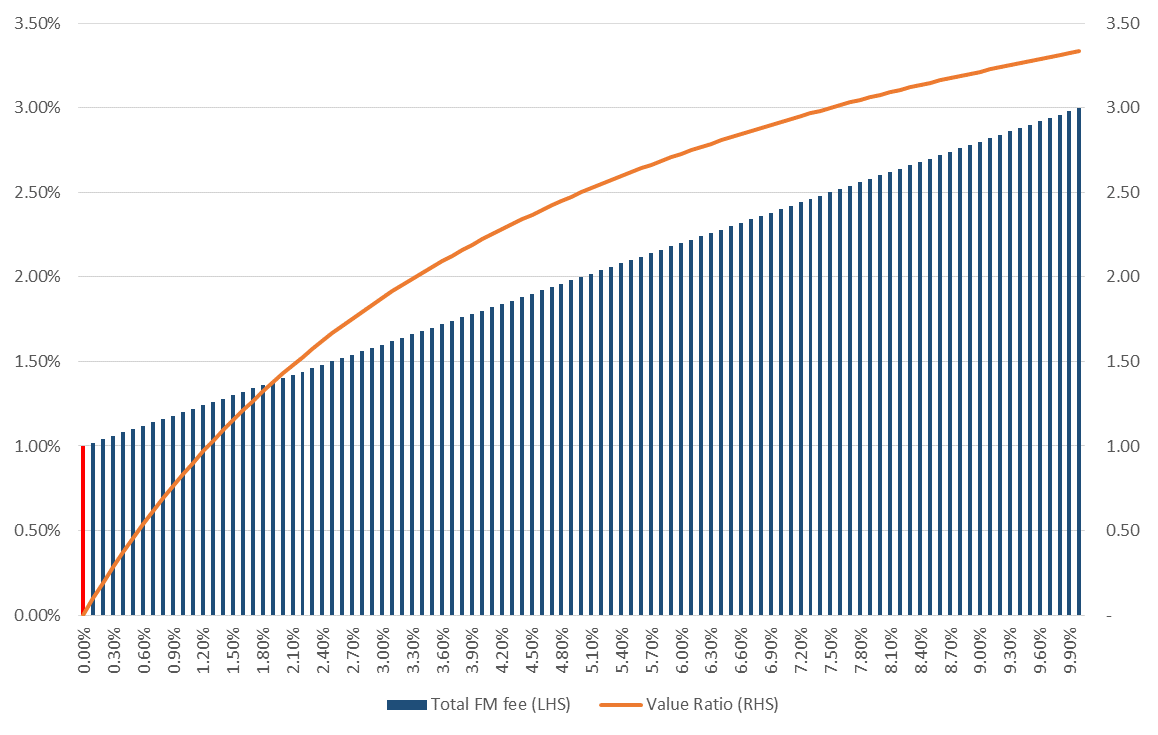 The argument which I referred to earlier is that at this market level of performance, investors are best served to minimise fees as they only erode returns. If we assume that the manager has produced market returns net of the 1% management fee, then the investor would have been no better off in a product which charges zero fees to provide returns equal to that of the SWIX, other than the certainty the product potentially provides. I’ve not taken this certainty into consideration when attempting to display the value attributable to the investor. Nonetheless, at returns equal to the SWIX, an investor gains zero value from the selected investment product. The Value Ratio is introduced to reflect value in a quantifiable manner, not dissimilar to risk adjusted return metrics. By simply looking at the alpha produced as a percentage of total fees paid, the orange Value Ratio curve provides insight into the real value of fees paid. At 0% alpha production, the fees paid offer no value. I recently had a haircut. For me, value in a haircut is measured in how long the process takes. A friend suggested that I perhaps overpaid for the haircut based on the result though, suggesting zero value. I felt differently because I’d only spent 6 minutes in the chair. So perhaps at 0% alpha production, value is an intangible concept. As one moves along the X-axis however, value is more easily measured as the Value Ratio (alpha divided by the total fee) increases.

One of the first concepts I remember learning in Economics 101, after Supply and Demand, was the concept of Marginal Utility. Marginal Utility can best be defined as the additional satisfaction a consumer gains from consuming one more unit of a good or service. Economists use this concept of marginal utility to determine how much of an item a consumer will buy. In that dreary lecture theatre, this concept was quickly followed by an introduction to the Law of Diminishing Marginal Utility. This Law states that as a consumer increases the consumption of a product, there is a decline in the marginal utility that person derives from consuming each additional unit of the product. This marginal utility will be unique to each consumer. Kind of like eating roasted marshmallows. I always start with vigour, but my young daughters seem to have a superior utility function which doesn’t fall as rapidly as mine does.

In the chart below, I compare the above Value Ratio curve to a curve representing the marginal utility of the alpha produced. This is a simplified measure merely showing the change in the Value Ratio curve for every unit of alpha produced. It may be difficult to see on the chart but the marginal utility of 0% alpha is zero. The utility then steps up with the first unit of alpha. From that point, the Law of Diminishing Marginal Utility is established. As every additional point of alpha relative to fees increases the value curve, the marginal benefit to the investor starts to decrease. What is interesting is that unlike my roasted marshmallow curve which quickly turns negative, the marginal benefit of additional alpha and an increasing Value Ratio, remains positive. In fact, it becomes a largely academic exercise to determine when the Marginal utility will turn negative, because at even 200% alpha generation the Value Ratio curve will not invert. 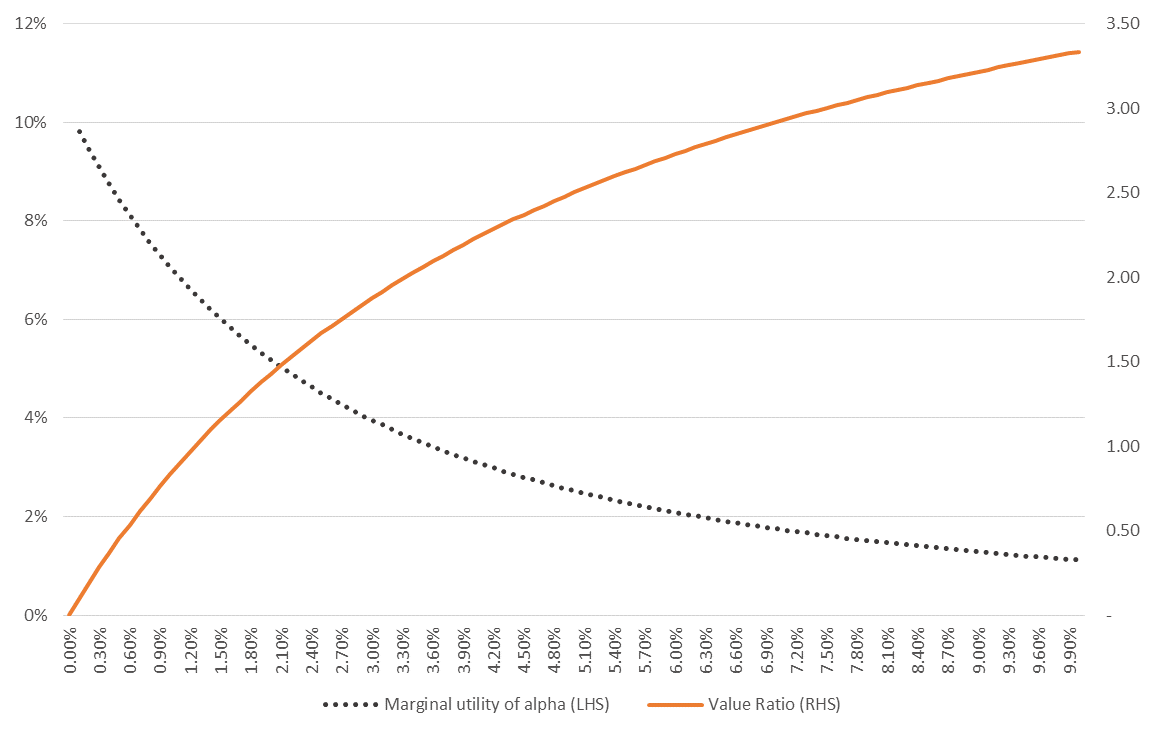 A blind focus on TER and EAC will result in a Value Ratio of zero. Achieving benchmark returns should remain the domain of low cost passive index trackers. The moment one introduces fees, however large or small, to achieve benchmark or index returns, negative value has been created for the investor, including index trackers which marginally underperform the market at very low fees. That cost should be the ongoing focus of investors. However, when one produces returns equal to an index return, we enter the arena of value as opposed to cost. Many critics of active management fees argue that if net returns are consistently 0.5% below the index or benchmark as a result of fees, the compounded effect on returns can be large.
I would agree. Simple maths tells us that 0.5% of fees compounded over 50 years will cost your portfolio around 22%. Hence the drive to minimise costs. The most favourable outcome from this approach would be 100% saving in fees and benchmark or index returns over 50 years. However the same simple maths applies to alpha. If one assumes 0.5% of alpha after all fees, then the investment portfolio returns 28% more than the benchmark or index returns. The asymmetry of this simple example is stark. Assuming 1% of annual alpha, the compound effect is 64% versus a 40% cost of 1% of underperformance of the benchmark or index returns.

Fund manager selection is crucial to this calculation. Many investors have berated the lack of alpha generation, almost suggesting that there is a lack of skill or market inefficiency, to consistently produce excess return. Some even suggest that alpha is a zero sum game. Notwithstanding these views, a number of successful fund managers have exhibited the ability to consistently generate alpha over extended periods. Just because a fund charges performance fees, doesn’t mean that it will generate alpha. Fund managers who combine skill, investment rigour, robust processes and evolving market insights have the potential to produce outperformance. The investor who endeavours to find those fund managers will experience a superior outcome.
So it would seem that not all fees are equal. A myopic approach to reducing TER’s and EAC’s may very well be to the detriment of long term savings goals of investors. Singular focus on costs, both asset management fees and portfolio trading costs, can never be viewed without the context of the alpha generated. In many instances costs rise as alpha increases, while the marginal utility to the investor remains positive because the Value Ratio continues to increase. 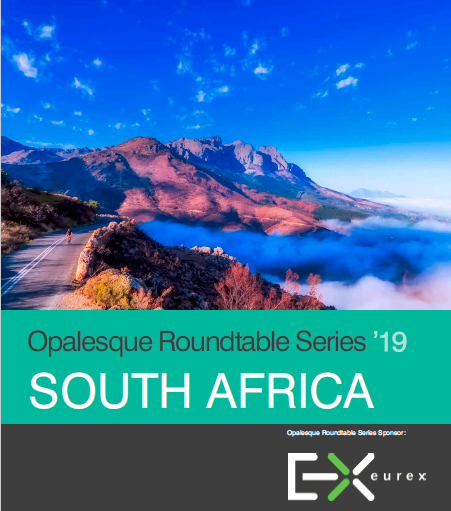