There was certainly no shortage of memorable moments for global markets in 2015 with the likes of the Greece saga, huge declines in commodity markets, China’s currency devaluation, the European Central Bank disappointment and, of course, the first Federal Reserve rate hike since 2006, all playing their part. So far, the markets have had a terrible start to 2016 with our outlook of another year of “low asset returns” suddenly seeming rather optimistic… In South Africa, we had our own amount of excitement/trauma in 2015, with the disaster of having had three finance ministers within a matter of a week and a resultant estimated R220 billion loss across South African equities and bonds rounding out the year.

I approached the month of December 2015 with the intention of “navigating the ship (our funds) into the harbour”, away from the risk of rough seas and then to ease towards sunny relaxing days at the beach, quiet evenings on the stoep with braaivleis and good wine, spending lots of time with family and friends and looking forward to the Proteas thumping the Barmy Army back to the UK…

Some of this indeed took place, some unfortunately did not… a lot more happened, however, than what most people could have imagined, that caught everybody off guard: instead of talking about Hashim Amla and his team or the next Springbok rugby coach over the perfect steak with red wine, much of the discussion during the past holidays was all about South Africa, the country, the rand and its future and where to go from here.

It was indeed an unexpected December and just as rough a start to the year of 2016 where macro uncertainly looks to be in the driver seat so far: China, growth scares; oil uncertainty; geopolitical risks and persistent scepticism have all played their part in bludgeoning markets so far this year. 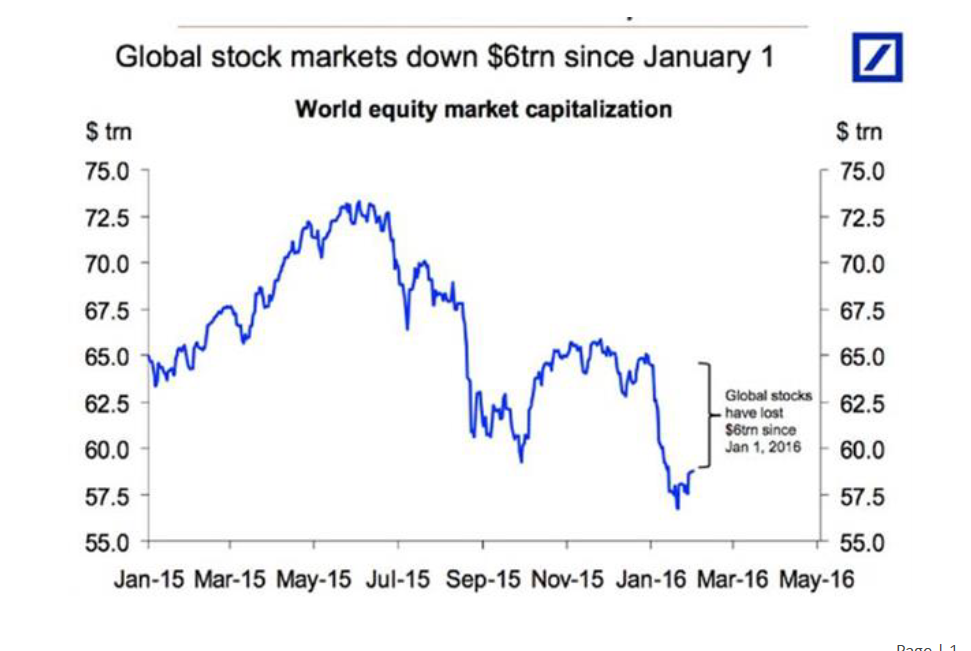 I suspect that policymakers have already lost quite a bit of sleep in the first few weeks of 2016. Historical irregularities abound, be they in the area of finance, economic policies or politics. Yet the inclination among many individuals and companies is to treat most of these as standalone’s, providing separate explanations for each. That could well turn out to be short-sighted, as I strongly suspect that the multiplying anomalies are signalling something much bigger, more systemic and far more consequential for both current and future generations. Understanding the “what,” “how,” “why” and “so what” is essential to navigating what lies ahead.

The oil market appears to have lost its anchors, with prices moving quite often by 3-5% on a daily basis and with little news to justify such movements.

All this market volatility has been accompanied by a lack of clarity from key policymakers, for understandable reasons. In the United States, the Federal Reserve in the latest policy statement refrained from providing its usual guidance on the “balance of risks” facing the economy. Chinese policymakers have made a series of unusual policy slippages, including a surprising U-turn on market circuit breakers while almost losing their influence over the offshore trading of their currency.

The first blow to risk appetite in 2016 came from the sudden drop in Chinese equities. Equities dropped 18% during the first two weeks and the market closed early on two separate days after sharp drops. New circuit-breaker technology introduced on the first of January brought the equity market to a halt once stocks dropped more than 7% in a day. The circuit-breakers were supposed to act as a buffer against big equity declines but achieved the opposite as investors feared being caught unable to liquidate positions. On the 7th of January authorities suspended the circuit-breaker mechanism and introduced a cap on the amount of equity major investors could sell over a 3 month period. Policy credibility has been questioned.

Meanwhile, policy experimentation from central banks continues, despite genuine questions about effectiveness, collateral damage and unintended consequences. Recently, the Bank of Japan surprised markets by following the European Central bank and taking its policy interest rates into negative territory. And, with markets also pressuring bond yields down, more than a quarter of global government securities now trade at negative nominal levels—that is to say, lenders pay to lend money to these governments.

Strange and unusual developments are not limited to the world of economics and finance. If nothing else, the political landscape on both sides of the Atlantic is being shaken by the growing influence of non-traditional movements (a possible Brexit in the UK and Mr Trump for President of the USA), causing the establishment to scramble as it tries to get back on sides.

I suspect strongly that, rather than speaking to standalone influences, these developments signal the gradual exhaustion of the path that the global economy and markets have been pursuing. It is a path that has:

1) Produced frustratingly low economic growth despite enormous—and, once, unthinkable—stimulus by central banks in both scale and scope;

2) Seen a significant worsening in the inequality trifecta (that of income, wealth and opportunity);

3) Distorted the allocation of capital, including inserting a worrisome wedge between risk-taking by financial investors and insufficient economic risk- taking by companies;

5) Challenged even the most well-managed economies around the world; and

The result of all this is a set of growing underlying contradictions that suggest the likely exhaustion of the current path for the global economy, along with the ability of central banks to repress financial instability.

Where does this leave South Africa for in the year ahead? The year of the downgrade? Downgrades to GDP and earnings are nothing new, but seem to be set to remain a theme in 2016. An S&P downgrade to sub-investment grade for South Africa is the event to watch out for in June this year.

South Africa has made many headlines recently, mainly for the wrong reasons as credit agencies downgraded their ratings outlook for South Africa and a series of political events shocked investor confidence in the county’s institutional framework. Concerns about China, credit and commodities continued on the external front, while the US Federal Reserve raised interest rates for the first time in a decade.

From an equity perspective, we will try to avoid high financial and/or stocks with high operational gearing and would favour companies with good positive cash flow from operations. Higher rates globally are probably a good reason to avoid highly geared corporates, particularly given the tepid earnings environment. Currently we prefer to stay defensive and stick to stocks that are (i) relatively defensive in nature; (ii) more exposed to offshore earnings rather than onshore earnings; or (iii) where the stock specifics suggest risk of earnings upgrades rather than downgrades.

Hope to see you during this journey of 2016 – Enjoy the ride.

Income funds are critical building blocks of a balanced fund